Brioche is an enriched bread from France where it’s hugely popular as a treat. Its called an enriched dough because you add butter, eggs and milk to it (as well as sugar). The extra fat changes the crumb of the bread. In parts of northern France, it’s used as the base of many pastries as opposed to using laminated croissant dough. Brioches is also used in a variety of savoury dishes too. Its very versatile.

We haven’t really taken to enriched breads in quite the same way over here though The Great British Bake Off seems to be obsessed with changing that.

We use brioche as the basis of our burger buns that we supply to people like The Castle Bar across the road and The Spotted Pig in Papcastle. The sweetness of the bun plus its density ensures that it won’t fall apart like cheaper buns. It’s a quality product. We egg wash the buns midway through baking and sprinkle either sesame seeds or poppy seeds on them. The surface of the bun then goes a dark, shiny brown colour.

It’s a very versatile product. I love bacon and caramelised onions on a brioche bun but then I can have quite a sweet tooth at times. We don’t make them for sale to the public everyday but you can order them if you want to.

I’m going to be experimenting with brioche over the coming weeks. Already we’ve occasionally made buns with chocolate in them. I’d like to have a go at pastries made with a brioche base like pain aux raisins. I’d even like to explore the idea of a Cumberland Sausage encased in brioche dough. It would certainly be a bit different.

Until then, we’ll plough away with our burger buns – each one hand-cut, hand-formed and finished off with care. They really are a joy. 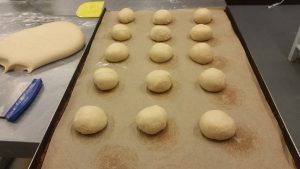 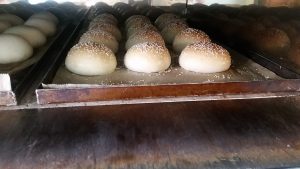 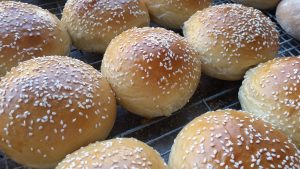