We’re often asked about this at The Coffee Kitchen. We often get people coming in and saying ‘I love bread but I have a nasty reaction when I eat it.’ Some people complain of itchiness or an upset stomach. I’m sure it’s horrible. I’m sure it’s uncomfortable. I’m just not sure that it can be blamed on bread.

Here’s the thing. I often say to people that it’s not the bread that’s at fault but the ‘type’ of bread they are eating. I often give away loaves to customers and say to them to come back and tell me how they got on. Only once or twice has anyone come back to me and said that they still have a problem.

Typical mass produced bread (oh, look, I’m ranting again) contains so many improvers and preservatives that you really don’t know what you’re eating. That’s not to mention all the enzymes and the like used in the manufacturing process that don’t have to be declared as ingredients. As I’ve said before, typical wholemeal supermarket-style breads can contain 18+ ingredients. Our wholemeal loaf contains four.

Up and down the country, people are rediscovering real bread, whether made with spelt, wheat, barley or rye. More and more people are turning away from the highly processed, mass produced loaf to the bread made with love and care by a local baker who actually cares what goes into the bread. That’s got to be a better way of doing things! 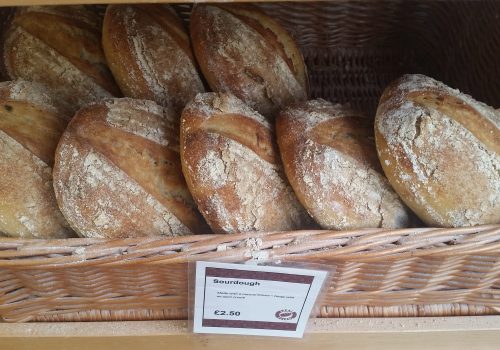