As per usual Taste Cumbria 2016 was an outstanding event. As per usual, for me it was 48hrs with little sleep, a lot of walking and a lot of scones (over 800 baked).

The weather this year was not as sunny as previous years but, by hook or by crook, the rains stayed away – until we were packing up on the Sunday when it lashed down. It was a bit windy at times. At 9am on Saturday morning things were looking a little hairy. But the gusts died down and we were treated to a wonderful day of food and drink.

Visitor numbers held up on last year, though people were spending a little less. I met people from all over: Manchester, Sunderland, Buxton, Glasgow to name a few. Taste Cumbria is getting a national profile and why not? There aren’t many places you can have a meal cooked for you by Simon Rogan and his team. There aren’t many places that can boast such an array of breweries – and we have the Lakes Distillery too.

Taste Cumbria is all about taking part so there were a series of demos and masterclasses too. If you were lucky, you would have seen me getting kids to throw pizza dough all over the place. The beer festival held at Jennings Brewery and hosted by Tractor Shed Brewing was a highlight.  The Trout Hotel (newly refurbished and looking wonderful) held a comedy night and a music night as well as tutored tastings from the team at the distillery.

Cumbria is so fortunate to have so many great producers and so many amazing products. Taste Cumbria is the perfect way to show off what we do. It makes me proud to be associated with the festival.

I’m sure next year will be just as good. The emphasis is making it more and more local all the time.

Look forward to seeing you then. 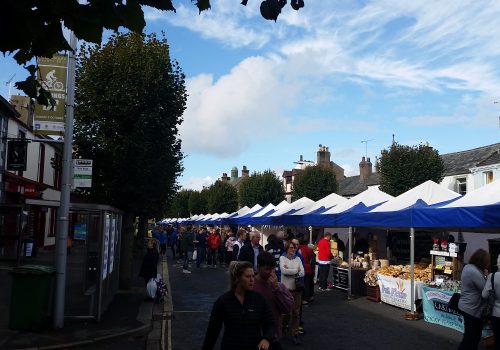